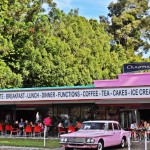 I once drove a pink Cadillac. Fast. And it’s true: you haven’t really driven ‘til you’ve taken one of those left-hand-drive, American V-8 monsters for a cruise.

It belonged to a fellow who owned the Tsitsikamma Village Inn for many years, and who collected and loved everything about Elvis, James, Marilyn, and the 50s and 60s, and he let me play in it for a few glorious minutes because I was writing an article about his collection of old cars. Jan was also the guy who rebuilt the hotel’s rooms after they were razed by fire some years ago, and who had the genius idea to build them in the various architectural styles of the Karoo – and also to renovate a row of shops along the hotel’s street-front in Storms River Village in the style of (you guessed it) the 50s – which is where Marilyn’s is situated.

But Jan sold the hotel a while back, so – wanting to know what the new owners had done with the place – I decided to stop there for lunch on a road trip I made along the N2 from Knysna to Port Elizabeth.

The hotel has a pub, an outdoor dining area (Café Bacchus), a micro brewery (Tsitsikamma Microbrewery – GREAT beer!) and two restaurants: the traditional South African de Oude Martha (Martha was the hotel’s cook for years!) – and Marilyn’s 60’s Diner. (Yes, I know. The apostrophe shouldn’t be there. But it’s part of the name, so…)

I repeat: it was awesome.

I was transported right back to my childhood, and my meal was so un-PC, too: carb-filled and dripping sweet. I *SO* could not resist drinking a Fruity Sundae (fresh fruit, fruit syrup, vanilla ice cream), and ordering a stack of Love Nest Flapjacks from the all-day breakfast menu (four flapjacks with syrup and blueberries. I had mine with whipped cream).

But I *could* have had a Rock ‘n Roll Sandwich, a hotdog, or a burger – all of which come in a goodly variety of flavours. Lots of beef on the menu, of course, but I was pleased to see that they also offer things like fish burgers, calamari rings, butternut soup, salads, and such – because although I’m not a vegetarian, I don’t eat meat or poultry.

There’s a cocktails menu too, of course (this is America, after all), and a satisfying selection of desserts like waffles and the all-important banana split (although I never have known whether the banana split – with its ice-cream, whipped cream, chocolate shavings, cherries and nuts – really is an American thing, or if we didn’t perhaps invent it right here in South Africa. I like to think it’s the latter).

Marilyn’s 60’s Diner is open every day for breakfast, lunch and supper during summer; in winter, it’s open for breakfast and lunch every day, and for supper on Fridays and Saturdays. And you don’t even have to eat there to enjoy its wonderful museum of old cars, bikes, and memorabilia – and its real jukebox, too. (See my video below).

You’ll find it on the main street of Storms River Village, in the Tsitsikamma region of the Garden Route of South Africa (about a kilometre off the national route N2, between Plettenberg Bay and Humansdorp. 62 km east of Plett, and 171 km west of Port Elizabeth).

Please watch my video and enjoy!