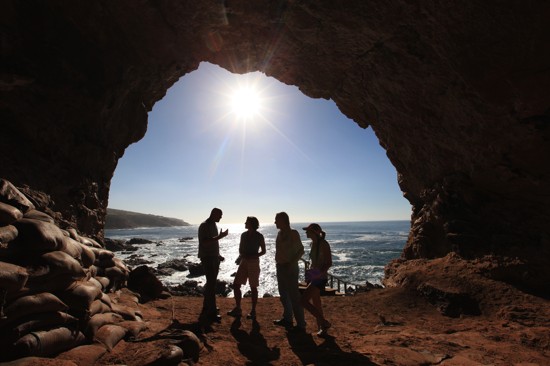 All of us alive today are descendants of a small population of perhaps only  a few thousand people who survived a massive ice age between 195,000 and 125,000 years ago by finding refuge on the coast of South Africa – which was one of just a few places in Africa that hadn’t turned completely to desert.

This is where modern human behaviour began: our ability to plan, our talent for complex technology, and our symbolic expression of belief and knowledge. (Our first composite tools? Tiny, exquisitely formed stone blades, their bases knocked flat and glued into other mediums like bone or wood.)

And some of the  sites at Mossel Bay have the longest timeline of human habitation of any of Middle Stone Age sites studied so far – about 120,000 years (off and on) over the last 162,000.

The caves were introduced to science by archaeologist Dr. Peter Nilssen in the late 90s, and they’ve become the focus of one of the biggest scientific projects of its kind in the world today: the South African Coastal Palaeoclimate, Palaeoenvironment, Palaeoecology, and Palaeoanthropology Project, or SACP4 Project. (‘Paleao’ = ancient.)

Peter, though, realised that what the research has revealed is significant for one vital reason: it highlights the fact that we humans have lost sight of the things that connected us to the earth – that made us part of the environment, rather than ‘masters’ of it – which is why we’ve expedited the onset of the sixth mass extinction event. (“Scientists have been warning for decades that human actions are pushing life on our shared planet toward mass extinction. Such extinction events have occurred five times in the past, but a bold new paper finds that this time would be fundamentally different. Fortunately, there’s still time to stop it.” Jeremy Hance, 20 October 2015, in ‘How humans are driving the sixth mass extinction’.)

As the Point of Human Origins brochure says: “Where we come from is just as important as where we are going.”

The Point of Human Origins experience was set up in 2013 to help satisfy public interest in the research, and they began with Peter as the only guide.

I had the honour of being one of his earliest guests – and I’ve been back three or four times since. It doesn’t pale: rather, it gets more fascinating, and I get  more hope for the future of humanity (and our planet) with every visit.

Peter begins the outing with an audio-visual presentation at the Pinnacle Point Golf Course club house before he takes you to the caves themselves – and you should allow at least three or four hours for the experience because the groups are always small, and the conversation usually ranges far and wide.

But Peter can’t personally attend to all the demand (he has a day job as a consulting archaeologist), so he’s trained two young men as guides – Christopher Jantjies and Chris Carr – so that guests can visit the caves on any day of the week.

Chris and Christopher’s tours don’t include audio visual presentations – but these guys are equally passionate about sharing the message, so your 90-minute visit to the Caves with either of them is going to be equally thought-provoking. And enjoyable.

And, of course, they’ve received great reviews on TripAdvisor as a result.

The archaeological cave sites you’ll visit are situated in the cliffs below the clubhouse at the Pinnacle Point Beach & Golf Estate – which means that you’ll have to negotiate about 180 steps to get down there (and back again!), so you do need a moderate degree of fitness.

Dr. Peter Nilssen – on the left – and friends in Mossel Bay’s Cave 13B 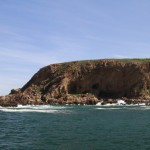 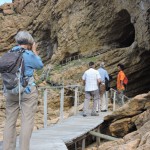 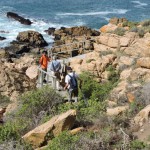 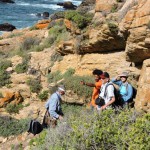